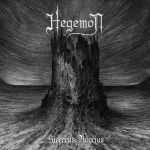 With HEGEMON, one of the longest running French Black Metal bands found its way into the roster of Les Acteurs De L’Ombre Productions, the premier French Label for black and extreme musical art. Being around for a quarter of a decade now, HEGEMON already released four albums (and some EPs and demos) for small labels, their L.A.D.L.O. debut “Sidereus Nuncius” being album number five now. And listening to them for the first time here, it is obvious that they sound pretty atypical for their origin. Unlike most other bands from France, HEGEMON are much more based in the second wave of Black Metal of the early and mid 1990s. Yet some atmospheric parts still have found their way into the songs on “Sidereus Nuncius”, adding a nice and quite unique touch to the black rage of HEGEMON. Thus we can find some really fine stuff here, especially when the French five piece slows down the speed like in ‘Shamanic Cosmocrator’ that is a little more laid back (in terms of Black Metal) without losing the dark atmosphere. With ‘Ascendency Of Astral Chaos’ HEGEMON even touch Gothic Metal styled moods while ‘Shape Shifting Void’ and ‘Ad Astra Per Obscura’ have a distinct touch of DISSECTION. In the end the quite epic ‘Your Suffering, My Pillars’ with its raging and furious breaks finishes the album with style, showing all the facets of the sound of HEGEMON. Check out one of the most Scandinavian sounding Black metal acts from France at www.facebook.com/hegemon.official and visit their label at www.facebook.com/ladloproductions