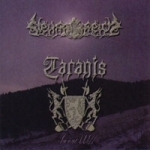 A split CD is a very suitable form for underground bands to present their releases to a wider audience. But also a risky business due to the fact that both bands are more less competing against each other. So even if we are talking about ‘old’ demo releases / tracks you can find a lot of light and shadows on "Ancient Will". The Irish band HEINRICHREICH is a one member project and on their demo easily called THE REICH. I can’t trace any special ‘new’ musical ideas or impulses. It’s more or less average Pagan Black Metal without any remarkable moment and I’m really wondering why Iron Age Records is supporting this band because a demo was a more than sufficient way to publish these six songs. TARANIS, the old Celtic god of thunder, is another band from Belgium (Flanders) and the songs from 2005/2006 are really impressing. The band is reawakening the old Black Metal spirit by offering five great hymns of heathen Black Metal completely in line with one of the best German Black Metal bands MAYHEMIC TRUTH. Especially the Thrash influences and the vocals are so essential for this music and based on these songs it’s more than clear why the cult label Iron Pegasus released their selftitled debut in 2007. In total a remarkable handful of songs by TARANIS which still justify the acquisition of this underground release. www.ironagerecords.com, www.myspace.com/taranisvl, http://heinrichreich.com