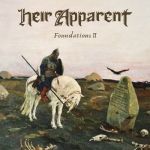 Vic Records from Holland are always good for a surprise. Since 1993 the label has mainly stood for quality Death Metal. But there are always exceptions. This time it’s about the US Metal legend HEIR APPARENT, which has been active since 1984 with interruptions. Their debut album “Graceful Inheritance”, released in 1986, belongs in every reasonable Heavy Metal collection. Not quite as well known is “Triad”, a compilation with thirteen tracks that were recorded live in the studio between 1985 and 1987 and first appeared on CD in 1999 via Hellion Records. Here is a new edition that also contains the three-track demo from 2003, which merges into one another as a coherent trilogy. For a full hour there is the finest US Metal of the eighties in the style of bands like QUEENSRYCHE, CRIMSON GLORY and FATES WARNING, who score with exciting guitar harmonies, soaring vocals and appealing choruses and are always well orchestrated despite the catchiness. The sound of the old recordings has been refined to the maximum and that is the reason to once again point out this year’s re-release on 2 CDs to all fans who are looking for these recordings or cannot find them in digital form. HEIR APPARENT upholding 37 long years of band history and since the CD from Hellion Records has long been sold out and there are still three bonus tracks on it, everyone should put this masterpiece on the shelf who does not own it yet. Explore more about the band at www.facebook.com/heirapparentofficial. You can contact Vic Records at www.facebook.com/vic-records-321130546025