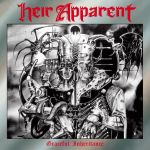 HEIR APPARENT is literally the gold standard when it comes to US Power Metal. I remember listening to this for the first time in the mid 2000’s and was quite put off with the vocals then. Needless to say I wasn’t a big fan of Bruce Dickinson either but in either cases the bands have had phenomenal musicians with stellar production raising their game significantly. This was something that left a mark on my mind and left a thought to always get back to them at some point in the future. I cannot recollect when I began enjoying HEIR APPARENT, but I’ve had them on repeat for a long time. For me the two names towards US Power Metal are HEIR APPARENT and JAG PANZER. A good side debate could be Terry Gorle vs. Mark Briody. Anyway, let’s come back to “Graceful Inheritance” now. We’ve got to first talk about the bassist on the record, Derek Peace, this man is an absolute animal! This is some of the finest bass work ever and it is so complimentary to the entirety of the sound, it’s an absolute delight to listen to this man play and slay. The influences are apparent, however the execution is literally perfect! HEIR APPARENT do not have a wall of sound lunging at you, they rather have a beautiful melodic sense of build up to the peak from which Terry Gorle simply kicks your rear on to the next level. This band is a perfect musical unit at the right time and place. The release year of “Graceful Inheritance” helps add in a little perspective, by 1986 IRON MAIDEN already released 5 albums and released “Somewhere In Time”, their 6th full length in the same year as “Graceful Inheritance” and well JAG PANZER released “Ample Destruction” in 1984. So, HEIR APPARENT had a fair share of burden to live up to and they lived up to it gloriously! Terrific production, absolutely insane solos, the low end kicking your teeth with perfect drumming from start to finish. If you’re not accustomed to high pitch vocals, the initial couple of songs could trouble you a bit, but I sincerely request you to march on and listen to this album in entirety. HEIR APPARENT is the perfect example of everything coming together in right quantities, these days it’s a pleasure to listen to this record. I genuinely do hope you order this and lose your mind listening to this record. This is some stellar work by Hammerheart Records, thanks guys! I won’t go through song by song or dissect the lyrics, that’s all been done, what’s left is for me and you to simply press play! For more band information, please visit www.facebook.com/heirapparentofficial, label contact: www.facebook.com/hammerheartrecords