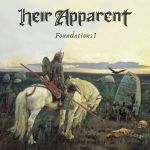 I think I already told you about the forgotten jewels and hidden gems of the glorious days of Heavy Metal in the 1980s. You know, no internet, just some magazines, tape trading and word of mouth – thus we have a lot of still underrated and simply forgotten bands and records. HEIR APPARENT from Seattle is another fine example. It was in 1986 when their first full length album “Graceful Inheritance” saw the light of day through the mighty Black Dragon Records from France. The label had an excellent name in the scene, even though their releases weren’t as common as those from greater independent Metal labels. Yet they always released great stuff. And “Graceful Inheritance” was another real gem from Black Dragon, one of their most splendid records for sure. Thirteen songs of finest, playful and unbelievably harmonic Power Metal, the American way, garnished by the fantastic voice of Paul Davidson. In my humble opinion HEIR APPARENT released a “must-have” for any lover of 1980s Metal with this album. And like nearly any debut album of that decade, “Graceful Inheritance” has a background history which is documented on the CD “Foundations I”. It is the re-release of parts of the triple vinyl album “Foundations” on Floga in 2016. The roots of HEIR APPARENT can be found in the short lived band NEMESIS, who recorded a demo with eight songs in 1983. Three of the four guys who started HEIR APPARENT later performed in this band, including bass player Derek Peace and of course mastermind Terry Gorle on guitars. And thus it is no wonder that the demo already featured six songs that were later re-recorded for “Graceful Inheritance”. It’s very interesting to listen to the first versions of masterpieces like the magnificent anthem ‘Tear Down The Walls’, ‘The Servant’, ‘Dragon’s Lair’ and ‘The Cloak’. Especially as these versions are rawer, more basic and feature a different singer in person of Corey Rivers, whose voice is rougher than the one of Paul Davidson. Two songs here even differ from the album versions as they had other titles and lyrics. ‘Tame The Beast’ is the first impression of what later became the mighty ‘And Dogro Lived On’ and ‘Masters Of Illusion’ turned to ‘Masters Of Invasion’. Both older versions are also very fine stuff, it’s just the final two(!) pretty laid back longer instrumentals ‘Improviso’ and ‘Mysteria’ who remained unreleased, with good justice in my opinion. After about a year of existence, NEMESIS changed both their singer, aforementioned Paul Davidson entered the band, and their name, finally becoming HEIR APPARENT. And they recorded a new demo as well, that documented the progress they made. “Inception” was released in 1984 and contained five songs, yet only two of them were really new. The opening ‘And Dogro Lived On’ was the overworked and clearly improved ‘Tame The Beast’ from the NEMESIS demo, ‘Tear Down The Walls’ and ‘The Servant’ were re-recorded as well, sounding a little better here. In addition two new songs were included who later became highlights of “Graceful Inheritance”: the semi-balladic epic ‘Keeper Of The Reign’ and the fast and short ‘Nightmare (Faces In The Dark)’. So I can really say that the title “Foundations” is a wise choice for the recordings that laid the groundwork for a masterpiece of US Metal. It might not be too thrilling for some, as it doesn’t feature that much unheard stuff, but it is a real joy and also a historic document for lovers of great 1980s Metal. For more, visit www.facebook.com/heirapparentofficial or www.facebook.com/vic-records-321130546025