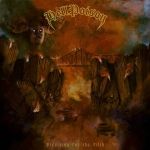 HELL POISON goes for the no frills, throat grabbing Speed Metal Punk and since the start in 2014, accumulated already 10 releases, if you count all the demos and EPs. Actually, it is a one man project by Deathhammer from Teresina, Brasil, but I understand that for live shows he puts the band together. Straight after the first jam session with this album it’s clear that bands like MOTÖRHEAD, TANK, VENOM, INEPSY and so on are main influences, but most of all it sounds like a punkier and simpler version of early TOXIC HOLOCAUST releases, which sometimes works (after a few beers usually) and other times just fails to really grab you. I gave it a few more spins as I usually do, unless the band really sucks, and sure it does what it’s meant to do – induce light moshing, but not sending into a violent frenzy. If you’ve been immersed into Metal since the 80s, you have surely heard it all before, so no surprises here, however the high octane energy and pure belief in the music which Deathammer pounds out and shares with the world can’t fail to impress and I would sure as hell mosh my headbox at their show. The lyrics are totally inspired by 70s – 80s Horror and Biker movies, no social politics and boring crap like that, just loud and honest Speed Metal Punk, which clocks out at 29 minutes and leaves you hungry for more (if you downed a few beers, in my case). Check the band here: www.facebook.com/speednhell. For a physical release here: www.facebook.com/bestial-invasion-records-247631521920716