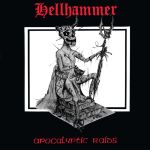 “Apocalyptic Raids”, the one and only EP from Switzerland’s HELLHAMMER, has been re-issued quite a few times over the years. But all those new editions always differed in one way or another from the original version, which was released on vinyl via Noise Records for the very first time way back in 1984. The first pressing of the EP came with a red band logo, was allegedly limited to 1200 copies and included a printed lyric sheet. Later pressings had a pink band logo, different labels and the opening of the EP sleeve was on the right side, not on top like with previous editions. The original European edition was a bit strange though, because side A (which featured the tracks ‘The Third Of The Storms (Evoked Damnation)’ and ‘Massacra’) plays with 45 RPM, while side B (with ‘Triumph Of Death’ and ‘Horus / Aggressor’) plays with 33 ⅓ RPM. Since 12″ EPs were always played with 45 RPM, I didn’t notice this very important detail at once and was a bit confused that side B sounded a bit strange at first. Needless to say that the newly recorded, way more doomy version of their classic demo track ‘Triumph Of Death’, with its tortured sounding vocals, that are so full of agony and pain, really left me speechless as soon as I finally played it with the right speed. HELLHAMMER received a lot of shit from the major press back then and often got labeled as the worst band that ever existed. But to me (and many others at the time), this Swiss trio was so fascinating and so unique, that I never cared for the obvious lack of musical skills. They had a sound and style of their own and just sounded heavy as fuck: the low tuning of the guitar, the simple riffs, the drum sound (“Hellish crossfire on wooden coffins” anyone?), the voice, the lyrics… it all just fitted together so perfectly that it’s no surprise to me that the band became legendary over the years. Unfortunately CD editions of “Apocalyptic Raids” never really lived up to the original EP and in that respect I really hated the very first version from 1990, which even got re-named as “Apocalyptic Raids 1990 A.D.”. The magic totally got lost due to a graphic design, which looked more like a lame bootleg rather than an offical release. In 1999 Sanctuary Music luckily put out a way better version of it, which already came close, but unfortunately used a different font type for the EP title… But now we finally seem to have an edition, that leaves nothing to be desired. It comes as a digibook CD, the material has been remastered and the font type used for the EP title is finally right again. The booklet features a lot of vintage photos (including outtakes from the one and only SHIZO session, the band that Martin Eric Ain used to be part of before he joined HELLHAMMER), lyrics for all the songs, Martin’s unused cover art “The nameless goat”, replicas of the original lyric sheet and backcover of the EP, plus new liner notes of Tom from October 2019. Like on the previous CD editions, the two tracks from the 1984 “Death Metal” compilation (‘Revelations Of Doom’ and ‘Messiah’), that got recorded in the same session as the EP tracks, are on here as well again. The cover artwork from the “Apocalyptic Raids 1990 A.D.” CD is included in the booklet as well, so even if you should own any previous CD edition, you can finally replace it with this new one after all. Great one! More HELLHAMMER info you will find at www.hellhammer.org or www.facebook.com/hellhammerofficial, label contact: www.noiserecords.net