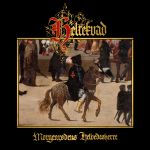 Have you ever bought an album for its cover artwork? It happened to me and if in some cases it was a mistake, in others it was a success. I have to admit that it’s the first time that I listen to an HELTEKVAD’s album and for sure I would buy “Morgenrødens Helvedesherre” only for its cover artwork. This front art is a segment of the oil painting “Chafariz d’El-Rey” – “The King’s Fountain” painted by an anonymous Flemish artist and dated 1570. The full painting depicts a scene in front of The King’s Fountain in Lisbon, Portugal. The section used by HELTEKVAD contains a depiction of an Afro-Portuguese knight endowed with the heraldry of the Order of Santiago, but for this cover artwork the cross was inverted. This art best represents the atmosphere of HELTEKVAD’s music, a good example of violent, cold and melancholic Black Metal with a strong Scandinavian sound and a mild medieval touch. This band from Denmark is formed by members from SUNKEN, AFSKY and MORILD. “Morgenrødens Helvedesherre” is their debut full length album, released by the German label Eisenwald. Here you get traditional nordic Black Metal with some furious and sick screamings, all well balanced with a pretty intense guitar distortion. The production is professional and polished, maybe too much. I would have preferred something rawer and darker, that probably would have melted in a more appropriate amalgam with the medieval concept. The ancient Middle Ages atmosphere is given by a couple of folkish interludes, the band pictures and the cover artwork. The drumming is pretty fast with typical euroblasts and a galloping double bass. The bass is pretty audible and the guitars alternate fast tremolo accelerations, obscure slowdowns and more melodic mid tempos. In conclusion, “Morgenrødens Helvedesherre” is an honest Black Metal album, that would have been better with a rawer production. www.facebook.com/heltekvad, www.facebook.com/eisenwaldofficial