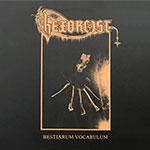 By now you are probably aware of the debut album of this death squad from the USA, specifically Florida. Members of this band were already active in other bands, like the great DEVASTATOR, but whereas that was more of a Death / Thrash / Black metal band, HEXORCIST is firmly rooted in evil Death Metal in the old POSSESSED, MORBID ANGEL, IMMOLATION vein. And this, their debut demo pressed in vinyl, is actually a much required piece of Metal that gives new hope for extreme Metal. In just 3 songs, the band delivers a brutal attack of old school Death Metal, with dark melodies and sinister auras, and a very good vocal attack which is not far away from the legendary SADISTIC INTENT style. The songs deal with the occult and supernatural themes, including the invocation of ancient evil spirits, so listening to this with just the light of candles is surely a good idea. Already released in tape and CD formats, for me this is the definitive edition, a great presentation and a killer sound. And yes, of corpse, get the debut album, which continues the style and I am predicting the band will soon release more that will surely take the earth by storm of the ancient gods. More information you will find at: www.facebook.com/hexorcistband, www.facebook.com/tenebrousaberrations-prods-101747498452310