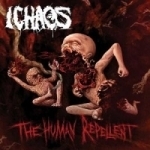 "The Human Repellent" is a debut full length album from Dutch I CHAOS, who first made their statement of intent with a well-recieved 4 song EP in 2009. So on "The Human Repellent" they don’t beat around the bush and go straight for the kill employing the fiercest Death / Thrash Metal ammunition. Face ripping riffs, head spinning tempo changes and low guttural vocals are all on the I CHAOS menu just a minute into the opening track ‘Scattered Remanant’ and they don’t stray away from that direction till the very last riff of the closer ‘Mass For The Blind’, which incidentally is my favourite track on the whole album. My only problem is this: while being perfectly produced and skillfully performed, after it stops playing, there isn’t any hook and riff or whatever that stayed in my mind. It’s all gone and forgotten. It’s pretty much the same as with bands like VOMITORY, SEVERE TORTURE or even NILE, with whom I CHAOS share lots of similarity in terms of performance and attitude, i.e. brutality levels don’t fall down for a second, technical skills are top notch, but the songwriting is left in the back seat and basically repeats what hundreds of other technical Death Metal bands have done before. By no means this is a bad thing, because when it comes to this style "The Human Repellent" is definitely one of the better releases in this particular warfield of the genre and die hard fans of aforementioned bands will be pleased to hear it. But with that said, there’s a certain spark lacking to make it a great album. Sometimes simpler things turn out for the better and I CHAOS should work on more memorable songs than just brutal, technical tracks. Worthwhile but not essential. Band contact: www.ichaos.nl, www.facebook.com/ichaosnl