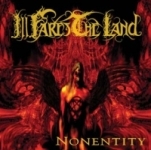 It’s great to see a killer act emerging from Belgium again after all (can’t even recall when I last really enjoyed something from that country, except for ABORTED). ILL FARES THE LAND is a rather weird name for a band, especially if it’s of the very brutal kind – which these guys really are! And if they wouldn’t have a rather blasphemous / occult looking coverart I would definitely have expected a more experimental type of music here… Anyway – ever since their origin back in 1997 they only did one demo tape entitled "Souls Aground On The Reefs Of Sin", which is said to have received quite a good response already and probably was the reason why Uxicon Records picked them up for the release of this MCD. Just like many other bands of today’s brutal underground, it’s pretty obvious that also ILL FARES THE LAND is heavily influenced by the American scene. They deliver a very intense inferno of technical, yet very raw and crunching Death Metal, luckily still far away from all the "frognoise" stuff that currently seems to infiltrate the international underground in a big way. This is nevertheless fast and brutal, just like it was meant to be – but neither in the DISGORGE nor HATE ETERNAL vein, yet equally exciting in its own way. The six tracks on this MCD should easily gain them enough worldwide recognition to secure a better deal with a more established label. Oh, and before I forget – an additional, very unique looking extra on offer here is the flipside of the CD itself (the side which your player uses) – it features an engraved kind of version of the band’s logo! I’ve never seen anything like this before. Very cool! The MCD sells for 10 Euro (Europe) / 11$ (rest of the world) – all prices already include postage. Contact: ILL FARES THE LAND, c/o Roel Ulenaers, Stationsstraat 6, B – 3520 Zonhoven, Belgium, email: illfares@advalvas.be, website: http://get.to/illfares