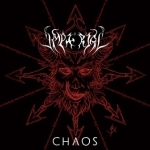 This French band will not be unknown to many of you, considering they’re around for some 14 years already having (prior to this) released two albums (”Aux crépuscules” in 1998 and Malmort in 1999), two EPs (”Thrasheurs 13” in 1998 and ”Moonblood” in 2002), a split with SABBAT in 2000, a compilation in 2003 called ”Aggressors… Not Followers” and a couple of demos. Listening to this stuff and reading the word ’humour’ in their lyrical theme (Metal Archives) had me pushed in a corner. Where is the line drawn between taking this serious or not? If it’s bad, is it intended or not? Tracks with titles like ’Cyberanus’ or ’J’ai Mangé Ta Mère’ (I’ve eaten your mother) make it easy, but musically it’s a different case. On one hand you’ll get kind of primitive Black / Thrash in twelve tracks that will be killer hearing performed live because of their fundament that is bound to make your headbang. On the other hand they got some stuff going on in tracks like in ’Tu Vas Crever’ or the aformentioned ’J’ai Mangé Ta Mère’ that’s too cool for a joke. It seemded like a similar case, at least in my mind, as NECROCURSE where I can’t take it too serious but that’s far from bad. Musically it sounds like a more thrashy version of NIFELHEIM with lo-fi production, and after four tracks you’ll know what to expect of the rest. What puzzled me that the band’s already been around for so many years and sticking to their guns. Pretty impressive. So best thing would be to take a listen and judge for yourself because it’s entertaining enough. www.facebook.com/imperialofficial, http://imperialofficial.bandcamp.com, www.facebook.com/pages/triumph-ov-death-records/13317197013385