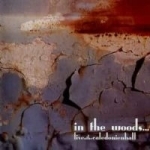 There have always been bands within the Black Metal-scene for whom the limitations of that scene were too strict and they shed those limitations off like snakes their skin. While especially in Norway drastic changes violently proved the creativity of those bands, I like to mention the brilliant ULVER or just MANES as two examples, IN THE WOODS… however developed slower and more continuously but never got the recognition they would have deserved. At least for me, the band remains probably the most underrated band ever to emerge from the land of the fjords. But already their demo "The Isle Of Man" – and I’d like to know another early 90s Black Metal-band who has already sold of the original demo more than 2200 copies, not to mention that the demo spread even further later when Hammerheart Wreckords (as the Norwegians call them nowadays) re-released it as a CD – proved how outstanding this band was. Three albums, a handful of 7"es and a compilation-album followed when IN THE WOODS… called it a day in 2001 and announced their farewell gig for December 29th, 2000 in Kristiansand, promising a setlist including all albums and all members the band ever had. As soon as I heard of this concert, I tried to get there, but failed back then to get the money for a journey to Norway and a place to stay. Now, two-and-a-half years later, the complete recording of this monumental gig is released on the newfound Karmakosmetix Recordlabel, owned by the IN THE WOODS…-members themselves. And while listening to this album, I really could kick myself again for not making it to Kristiansand. The band performed 20 songs in a good 2œ hours in more or less chronological order and nine musicians were involved. While four out of the first six songs are from "HEart Of The Ages", followed then by the complete "Omnio"-album, it is obvious that a band like IN THE WOODS… transformed their earlier achievements into the year 2000 which means: the shrieking vocals have completely gone, yet the songs still convince with unknown obliqueness and disharmony that never sound unintended; a weakness were you have the feeling that the soundwall is completely broken yet is always alive. Everything sound like if it was performed like it should have been, may it sound strange in the beginning (with the exception of some female vocals which simply are wrong), and the heaviness never was really lost even though those Black Metallish vocals decreased to a minimum, but to me personally it rather sounds like especially the tracks from "Three Times Seven…" gained heaviness in a live atmosphere. Within those 20 songs, there are also two (‘Beer’ and ‘Don’t Care’) never before released songs and obviously two coversongs (‘White Rabbit’ and ‘Dead Man’s Creek’) who finish the picture of a brilliant band now gone. And while I wait for the DVD-release which still should come out one day or another, I can only recommend this album. Money is seldom invested in a better way, especially since this double-CD shouldn’t be much more expensive than a normal full-length, and the first edition is also accompanied by a Karmakosmetix labelcompilation on which honestly only a few bands really could catch my attention. For the last time I bow to down to the genius of those mighty Norwegians… www.karmakosmetix.com