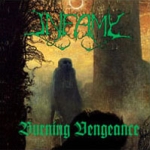 The L.A. based INFAMY already blew up some dust with their first and up to now only album “The Blood Shall Flow” in 1998. This one gave us damn brutal Death Metal, the American way, with an anti-virtuosic approach. And I can’t deny that I like the album especially because of that. Three years later, the band finally got along with the loss of original singer Joshua Heatley and recorded two new songs with guitar player Memo Mora on vocals that followed the footsteps of “The Blood Shall Flow”. For years, these two songs were only circulating in the underground and on a self-released CD-R, since Unholy Domain Records finally made them available again. But maybe not for long, since it’s a vinyl 7” limited to only 300 copies, so be quick or be sorry. And you can be sure that you will be sorry, since these two tracks are fuckin’ brilliant crushers. Both ‘Burning Vengeance’ and ‘Rape, Grind And Pillage’ are intense as hell and brutal as fuck, thanks to the fact that they are never too fast, except for some short outbreaks of blasting beats. Instead, we get morbid tales, told by a brutal voice, and crunching guitars in the most luxurious ways. Brutal Death Metal will hardly ever be any better. It’s such a pity that the announced second album never saw the light of day until today. Maybe it will happen once upon a time, since INFAMY are still alive. Until that (hopefully not too far away) day, check this EP! Visit the band at www.facebook.com/pages/infamy-la/116034668483051 and the label at www.facebook.com/unholydomainrecs