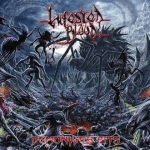 First off, I sincerely have to confess to all of you right away that I have always had a slight problem with all of these new, modern sounding Death Metal bands with millions of rhythm changes – and another millions of blindly churned out riffs, making you some company through the stuff they do. You know, bands like NECROPHAGIST, DEEDS OF FLESH, GORGASM, DISGORGE and bands with similar ink, they never let listeners go away that easily, do they? The very same words can also be applied to this Brazilian Death Metal horde INFESTED BLOOD that have already been around since 1999, making 3 full-lengths prior to this latest effort of theirs, "Demonweb Pits". INFESTED BLOOD’s new album is full of intense riffage and unexpected breakdowns, that move violently and ruthlessly over everything – topped with Diego’s gurgling cookie monster vocal delivery, which unfortunately ain’t something that could make me personally even more hyper-excited about this type of stuff either. But then again, don’t get me completely wrong though. INFESTED BLOOD can also sound pretty darn entertaining momentarily whenever this type of stuff gets served in small doses. But just in those small doses because INFESTED BLOOD’s songs are so fully packaged with a ridiculous amount of different things that really demand so much concentration from the listeners. What can be considered kinda original about INFESTED BLOOD’s sound, they have also brought some symphonic (and other) effects into use within their stuff without prejudice. A short instrumental track ‘Summoning The Arachnid Demons’ is pretty actually a crazy sounding bombardment from them; definitely one of the true pearls on the record (credits for them go out for a guy named Michael Hoening). In short, those of you who have already heard INFESTED BLOOD before, or are just the fans of this brutal, complex sounding and US styled tech Death Metal genre overall, should pretty much know what to expect from this Brazilian Death commando. I did like "Demonweb Pits" myself to a certain extent too, but having said it there already, only in small doses at one time. A good and clear production on this record helped me to like it a bit more even, I can tell. INFESTED BLOOD: www.facebook.com/infested.blood, label: www.gormageddon.com