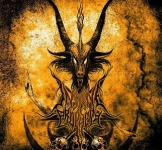 Indian Xulfi Nawaz and Ifty Sarwar are not only identical twins but they do have a common interest as well: to play extreme Metal together. INSANE PROPHECY was formed in 2008 by this very duo in question, and these two fellows’ first outing is this 4-track EP, titled "Apogee Of An Inquisition", which was put out 4 years after the reformation of the band, in 2012. Musically this is as intense, violent and powerful as it gets: excellently performed blend of Black and Death Metal that rips your face off within just a matter of seconds. The intensity level of all 3 full songs grows quite high really fast, Xulfi, Ifty and a third member on this recording named Bikash Subba, also on guitar (according to the credits on this EP anyway), relying heavily on straight forward, brutal yet nicely idea-rich and somewhat technical elements within the songs. The title track ‘Apogee Of An Inquisition’ is clearly that particular song out of this promising EP, where this trio has channeled most of their creative juices into: an awesomely raging tune with some piercing and sharp riffage, hostile vocals, true technical playing virtuosity and overall full of kick-assness quality of all kinds so to speak. A face-melting song for sure. The last song, ‘Obsequies’, is an instrumental tune and sort of outro track – entirely composed from start to finish by Ifty Sarwar, in which he also takes care of all the instrumentation (drums, bass and guitars). It’s a very mellow type of instrumental track, fitting very well as an ending song of the EP, after such a merciless sonic beating that the first 3 songs offer. Now we only need to get their next release out, having material worth a full-length as this release surely made me hungry for more. More about these talented Indian blackened Deathsters can be found at www.facebook.com/insaneprophecy