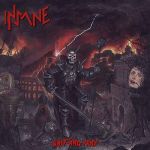 One day I came up with this CD cover in some store list about 15 years ago. The logo was a complete SLAYER rip-off. I mean it was the same damn font! So, in tha era of low speed internet I decided to get more info on it. When the title song came up, I was like damn, they even have like exact same song names just changing things here and there! Well, it could turn out to be a bad joke or a good clone, so I risked a few dollars and ordered it. I mean, SLAYER at that time was releasing really mediocre albums, and although they were always a big influence on many bands, actually very few were like trying really hard to emulate them as direct as this Italian band. And with references so direct to Kerry King and company for their two first albums, well it was obvious that they got my attention. So the shiny disc arrives and yes, I was in (south of) heaven! This is SLAYER of the 80s re-imagined by some guys in the 2000s and damn were they good! The guitar sound, the Araya – esque screams, the drumming speed (obviously not reaching Lombardo’s level, but quite understandable) and I was possessed! Ranger after ranger, riff after riff, and I was like, damn why didn’t these guys release something else? Well, it seems fate was not on their side, and they went a very silent death that the didn’t deserve. Was it because they were such a blatant copy? Maybe… but then I just imagined what would happen to the band if they had continued like this… probably one or two more releases in a similar style, and then they change their sound for worse… like what happened to SLAYER, I am afraid. Or probably (which in my book is most likely improbable, but hell, there’s a chance), they will give us a masterpiece humanity’s not worthy. We’ll never know. But for now, this is their legacy and it is such a good one. Oh yes, did I tell you they are the continuation of the band SLAVES? And that some songs are here and there too? And that they add some demo versions in here? And that it is available on vinyl and CD by those good fellows at High Roller Records (hi Stefan!)… Well, if you know that evil Speed / Thrash Metal was a thing of the 80s go get this and the SLAVES release right now. You know, that Hell Awaits… www.facebook.com/insane.original, https://insanewap.bandcamp.com, www.facebook.com/hrrecords 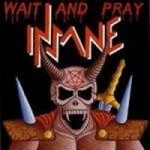 I discovered this band purely by accident. It happened that on a No Colours Records sampler was featured one track of a band called SLAVES, which blew me away because of its genuine 80s Thrash atmosphere, very reminiscent of INFERNAL MAJESTY. My first investigation lead me to a dead end, until a review of the Keep It True IV festival made me see the light, referring to the Italian band INSANE as formerly known as SLAVES. In no time, the INSANE record was mine. Well, the layout tells a lot about the content. The INSANE logo is written with the SLAYER logo fonts, a cheap horned monster adorns the cover, and the musicians’ pictures on the back have the same charm and hilarious value of what you can find on the back cover of “Show No Mercy”: same eyeliner and spikes! I knew at once that this Italian three piece was something special. Well, I was yet lead to revise my first judgement, because the music on offer, as good as it is actually, could disappoint in the long run. Of course, the first song causes a serious headbanging session, but once the initial jolt had made its effect, you are left with seven other songs tailored on the same frame. Don’t get me wrong, “Wait And Pray” is a damn good release, but I think INSANE missed the point here by not allowing themselves to introduce some variations within their compositions; this is precisely variations and rhythm contrasts that made “Hell Awaits” and “None Shall Defy” so interesting and still fresh today. The production duties were held in Vancouver, and the sound on “Wait and Pray”, while not being “retro” (because of its great and modern dynamic), evokes the old times OK. The musicians are faultless on this, and perfectly master their instrument. Bassist / vocalist Dan Montironi shamelessly borrows the (early) Tom Araya style, but here stops the comparisons with SLAYER musically. One has to look rather at lesser known acts like BLESSED DEATH and ANVIL BITCH to find an equivalent to INSANE. On the contrary, INSANE lyrical “inspiration” comes directly from legendary bands as POSSESSED (they even have a song called ‘The Exorcist’, not a cover though), SLAYER (again) and NASTY SAVAGE. My advice to the band: they should concentrate next time on the crafting of a more varied selection of songs, because they can’t rely very long on their pseudo – SLAYER image. I am pretty sure they can offer a real masterpiece; it is not yet the case with “Wait And Pray”. And yes, I prefer the one and only SLAVES track I heard, sorry!