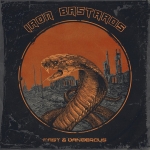 Up to now, F.D.A. Records is nearly exclusively known for Death Metal releases of the finest. But even Rico knows that there is more than Death. So, here we have the most untypical F.D.A. release to date: the second album from IRON BASTARDS, hailing from Strasbourg in France. Their mission is to keep the music and style of MOTÖRHEAD alive, the French way. I might have guessed that before I heard the first riffs, hence the name. Of course IRON BASTARDS are not as good as the original, since no one can keep up with an icon of Rock music. But from the first notes of the opening title track, “Fast & Dangerous” is a veritable alternative for those who can’t get enough of Lemmy and the guys. In the case of this album, “the guys” definitely are Eddie and Philthy, since IRON BASTARDS sounds like a mix of the albums from “Overkill” to “Iron Fist”. And only defining the Strasbourg rockers as a coverband with own songs is a little unfair, for the lead guitars often go different ways. Take the solos in ‘The Princess & The Frog’ as an example, who remind of Pete Brabbs’ playing on the early TANK albums, or the Boogie leads in ‘Out Of Control’. And I can absolutely not deny that songs like ‘The Code Is Red’, ‘Rock O’Clock’ or ‘Born On The Wrong Side’ are moving my ass and my fists. And since there will be no new MOTÖRHEAD album ever, IRON BASTARDS are a fine band to fill the gap they left. So, in case you need a fine Rock’n’Roll band, these guys are for you. Check them at: www.facebook.com/ironbastardsrocknroll or https://ironbastards.bandcamp.com. And never forget to visit the (new) site of the dedicated label, it’s worth any visit: www.fda-records.com