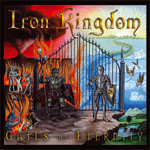 This whole album screams "1985!" to me! The musical style is definitely classical, slightly progressive US Metal with a deep IRON MAIDEN impact, the unfinished production with its a little thin guitar sound could have been from that Metal heydays as well. And in 1985, IRON KINGDOM would have been getting much more of the attention they deserved. But I fear in 2013, a self financed not too original Power Metal album with high pitched vocals is something that passes by the attention of most Metal maniacs. And that’s a little sad. IRON KINGDOM from Surrey, B.C., Canada may not be the cream of the crop, but they do what they do with a passion. "Gates Of Eternity" is their second album already, two years after they started and released their debut "Curse Of The Voodoo Queen". Songs like the opener ‘At The Gates’ with its acoustic break, the deeply MAIDENesque ‘Chains Of Solitude’ or ‘Guardian Angel’ (the parallels to FATES WARNING can not only be found in the title here) are good songs, played with passion and enthusiasm. And the epic ‘Egypt (The End Is Near)’ is a fine example that the progressive songs of MAIDEN have left the traces they deserve. To be honest, I’m sure that bands that really comply to every cliché in Metal from the heart can’t be bad at all. And bands that love IRON MAIDEN and don’t even make an effort to disguise it can’t be bad either. So, I shout out a not too loud "Hooray!" for IRON KINGDOM and hope that they will not fail on their march to be ‘Crowned In Iron’. I’m pretty sure our dedicated buddies at That’s Metal Magazine will celebrate IRON KINGDOM excessively, and they will do it with reason! Those who know every word in that mag from the heart shouldn’t hesitate to check www.iron-kingdom.com or www.facebook.com/ironkingdom