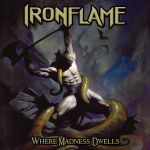 Classic Power Metal infused old school Heavy Metal as the textbooks dictates it. That is what IRONFLAME delivers. Andrew D’Cagna is the man behind the band, and the sole soul when writing, arranging and recording the albums, which is quite impressive as the musicianship all around the IRONFLAME releases is quite stellar. It is close to the first Heavy Metal band I’ve come around being a one-man project (when playing live, the band becomes a quintet!). One-man projects is something I have been associating with more harsh genres such as Industrial, Black Metal, Death Metal and such, as those genres perhaps aren’t as much driven on musicianship as on sheer intense emotion, where Heavy Metal needs a great touch of musicianship on top of a great atmosphere. That being written D’Cagna is doing both quite well. There is no doubt that he is handling especially guitars and vocals quite well, the bass is present, rumbling all the right places and doing its job. The drums on the other hand, they are delivering a solid backbone, though I have a quite hard time to figure out if they are the real deal or programmed. The rhythm patterns are quite square all along the tracks, and have always been, in IRONFLAME’s case. The drums sound great, though again it is textbook rhythm patterns all the way through, without many shenanigans. The song writing is stellar, as already written, very classic and powerful American Power Metal based on classic epic Heavy Metal. Catchy, melodic, great guitar solos and sheer power – and hooks all the right places. The vocals from D’Cagna are also great, he has an organic and powerful to very controlled melodic way of singing, always placed great relative to the music. The vocals, together with the guitars are bringing aces home on this album, as well on IRONFLAME’s three records prior to this – that together with the great songwriting, which also always has been a trademark of D’Cagna. Production-wise the album is ace as well, a clear and powerful sound with the right swing on the instruments and vocals, intense and quite organic, flowing with the music. If you miss your late eighties feel, like I often do, the Heavy Metal scene right now is blasting with amazing bands and releases, taking us back to the glory days of power and conviction. This isn’t pure retro, it is classic Heavy Metal done in an updated manner, with so much power, energy and epic atmospheres, that it is hard not to be taken away. “Where Madness Dwells” is yet a great album from IRONFLAME. I still have “Lightning Strikes The Crown” and “Blood Red Victory” as my favourites, though this one has been growing on me, all along the reviewing process. Enter the reign of the tyrants: www.facebook.com/ironflameusa, www.facebook.com/hrrecords