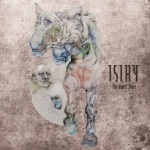 Three years after the self-titled debut ISLAY from Emsland, Lower Saxony, Germany are back. Three-quarters of an hour wild, aggressive melodic Death Metal, executed with superb skills. The five guys are playing so tight and are putting things straight to the point, it is really awesome and the ten songs are pure enjoyment. Seems like the band is spending every minute of spare time in the rehearsal room. And the outcome is splendid Death Metal. If every band would act with such dedication, the Metal community would be saved from a lot of weak and mediocre outputs. You can tune in at every second and will not find a feeble or weak passage. Melodic Death Metal, some acoustic guitars and clean singing here and there. The keyboards are sometimes very dominant, but not for the whole time. Just when they are needed to underline or emphasize the atmosphere. Sheer, blasting insanity mostly, but also some rather slow or calmed down moments here and there, I even spotted some epic minutes. ISLAY are able to combine both Black and brutal Death Metal influences within the borders of melodic Death Metal. Some people may think melodic Death Metal attracts no one anymore, but just listen to "The Angels’ Share" to reverse your opinion. www.facebook.com/islaymetal, www.finalgaterecords.com