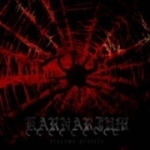 To be honest, I have not followed Swedish Death Metal act KARNARIUM that much after 2006’s "Deity Of Opposites" EP and only heard their 2008 debut album briefly – something I actually regret by now and will change asap. Now, the band’s second album “Otapamo Pralaja” hits us via Nuclear Winter Records and should have all fans of yet another typical Sunlight-rip off band or otherwise conventional retro Death Metal run for cover. Of course, there’s nothing wrong with worshipping early ENTOMBED, MORBID ANGEL, AUTOPSY or other classic deathhammers but instead of mere copycatting KARNARIUM fortunately deliver a bizarre and frighteningly eerie take on “old” Death Metal which rather smells like a fresh corpse and not as putrid as the dead girl that’s been lying in a ditch for years. Not very much unlike Australian weirdos PORTAL these Swedes here employ tons of angular, contradictory riffs and sick harmonies as main tools of their trade along with a sinister, disturbing atmosphere, furious drumming and possessed, cavernous growls reeking of sincere dedication and emotion. You wonder at the word “emotion”? Well, there are so many soulless Death Metal vocalists out there that guitarist and singer Funeral Whore’s performance clearly sticks out as a positive example on how to proper express the visions and feelings hidden in the dark recesses of the mind. Well done! Musically, KARNARIUM dare some unconventional steps as well: after starting with an instrumental, violent song, followed by two compact yet intricate pieces from which especially ‘Travelling Through All Spheres Of Thought’ impresses with a mighty, steamrolling INCANTATION-esque riff, track #4 ‘Per Me Reges Regnant’ overwhelms by being a diverse 12 minute epos culminating in a dragged out, droning closing part soaked with feedback. Afterwards another instrumental follows, a decision I consider a bit unwise due to the fact of being equally hypnotic as the previous track. Fortunately, you get your dose of pure Death Metal on ‘Order Of Ahamkara’, ‘Hanress The Arcane Rhythm’ and the final track ‘Ode To The Black Mother’ which are further, well-crafted proofs for KARNARIUM’s vicious sound somewhere between LIERS IN WAIT / GROTESQUE, IMMOLATION and the aforementioned acts. While there is plenty of fast sections on this opus, KARNARIUM add some bang-able thrashing parts and slower passages keeping their chaotic approach “under control” and thus avoid overtaxing the listener. There’s also short, somewhat redundant Black Metal parts strewn across the album featuring slobbering snarls – if you have a growling voice like Funeral Whore such screams simply sound weak and pale in direct competition, so to speak – but that’s only a minor complaint on an overall damn strong album. Due to its very organic, authentic and live sound – nothing digital here, bitch! – “Otapamo Pralaja” should be the sort of Death Metal Black Metal maniacs should feel comfortable with, too, since it is raw, powerful in spirit, delves in the occult lyrically and comes across hateful and honest. Personally, it took me a few listens to really get into this platter but its captivating atmosphere and darkness result in an album blessed with longevity. Hear ‘A Maddening Laughter’ here, or listen to ‘Per Me Reges Regnant’ here and order LP or CD at www.nuclearwinterrecords.com. More KARNARIUM at www.facebook.com/karnarium