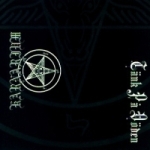 Not all the Death Metal world evaporated in the mid to late 90s. Bands such as NOMINON, KAAMOS, INSISION and REPUGNANT led the charge, despite the fact that were no soldiers to command, or at least, not as many as there once had been several years prior. Add to your list, KARNARIUM. While not as clear cut as NOMINON, KARNARIUM are raw, and old school to the core. "Tänk På Döden" is a collection of their demos dating from 2000-2004 (well, not really: it actually features material from the band’s self-titled 7", their split tape with BETRAYED, songs off the "Breaking The Manacles Of Malkuth" demo, a DISASTROUS MURMUR rehearsal cover, a track from their "Demo # 1" and some other unreleased versions – Frank). As such, the tracks can sound sloppy at times but, depending on how you look at it, that only enhances the charm in a TREBLINKA sort of way. KARNARIUM could easily be a full time band, but since the members are all busy with other projects like CHURCH BIZARRE, it’s unknown whether or not KARNARIUM releases will be as frequent as the other bands these gifted musicians play in. www.myspace.com/karnarium