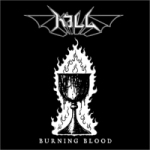 It’s been a good while since I last checked up on the Swedish hell brigade KILL, I think it was when they released "Inverted Funeral" or perhaps the album after that. The music of KILL never kicked in my teeth, even though they’ve done some good tunes now and then. We are now writing 2012 and they are ready with their new opus "Burning Blood" about to be released on BlackSeed Productions. We are getting our usual furious attack of Black Metal spiced up with a good Death Metal feel, this is evil and brutality blended into a nice audio-sledgehammer on our senses. The riffing is most of the time interesting and slashing, and the DARKTHRONE homage going on at times, is fitting and quite grand, especially for a fan as myself. The vocals are sick, heavily reverbed and grim, they do as the rest of the album reek of the start to mid-nineties, when music as this really did a difference, a nice blast of nostalgia. It took some spins for me to get into "Burning Blood" it seemed too simple and straight forward from the start, don’t get me wrong, it is simple and straight forward, though it contains a good deal of layers and some pure evil. Even pretty parts, as when we get freezing cold DARKTHRONE riffs or wicked eerie melodies that could have been written for a DARKTHRONE, MAYHEM or BURZUM album back in the days. A good mix of Scandinavian Black Metal, sheer brutality and chaos as Australia once were known for and dark pummeling Death Metal, I approve. Enter the temples of desecration for more info: www.facebook.com/thetruekill, www.blackseedprod.com