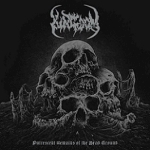 Well, sometimes you come across a release with a band, that’ll show you’ve been sleeping during the lesson, as it must have been a mistake not hearing about such band before. KINGDOM is such band, a hellhorde from Poland blasting modern atmospheric brutal Death Metal with a good base of old and a tad of Black Metal to keep the dark and cold atmosphere going. The band is well-founded in atmospheric dark pieces that drags you into a vortex of misery and despair mixed cleverly with all out brutality and skull-splitting heaviness. If IMMORTAL had continued on ‘the towards Death Metal path’ they slowly started on "At The Heart Of Winter" and continued greatly and more outspoken on "Damned In Black", I guess the result would have ended, where KINGDOM is now. The band is also covering IMMORTAL’s ‘Blashyrkh (Mighty Ravendark)’ so the trace might not be totally imagination from my side, and they deliver the track quite well, not far off their own style, which here let us hear how closely knit they are to IMMORTAL’s heritage. I really like the fluid mix of brutal and heavy Death Metal, the more atmospheric parts and the blazingly cold Black Metal parts, all which the band incorporates quite easily and seamlessly into the overall attack, well-executed and well-written brutality. "Putrescent Remains Of The Dead Ground" is quite an enjoyable and brutal atmospheric blast on a chilly Danish spring afternoon, a well made album that is a sure listen for fans of the above writings. Enter the darkness that emcraces me: www.facebook.com/kingdomtempleofdeath, www.godzovwar.com