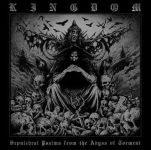 Poland’s KINGDOM have been around since 2003, delivering a fusion of old school phrasal Death Metal mixed with some Black Metal influence. “Sepulchral Psalms From The Abyss Of Torment” is the band’s third full-length release, and first new material since 2013’s “Morbid Priest Of Supreme Blasphemy”. In a year where we have seen long-established acts around the globe start to pack it in, in a sense of cleaning up their sounds and moving more and more into commercialization, KINGDOM pulls us back into the filth and frustration that made this genre a global language. Opening with the sound of heavy machine gun fire, ‘Sepulchlar Psalms’ ushers the listener forward on mid-tempo double-bass rolls and chords that explode like cannon fire. After this brief introductory segment resigns, KINGDOM moving into powerful, surging Death Metal; loaded with grotesquely down-tuned buzzsaw guitar riffing and fast, blasting drums. The second track, ‘Monolith Of Death’ is comparable to a trench whistle being blown, with soldiers rushing across a barren, crater-pocked battlefield of attrition and death, only to be ripped into pieces by defensive barrages of automatic gunfire and dismembering artillery. ‘Monolith Of Death’ is, by far, the shortest song on the record, clocking in at two minutes. But for two minutes, it is pure hell being delivered. ‘Forsaken Tribe’ hits with a more melodic uptempo delivery that runs more akin to older Thrash Metal than anything else. ‘Kaplica Ducha Zgnilego’ displays KINGDOM’s other method of execution, it’s crushing mid-tempo attack akin to early VITAL REMAINS with spirit-choking atmosphere on par with FUNEBRARUM or INCANTATION. ‘Abyss Of Torment’ feeds into ‘Black Rain Upon The Mountain Of Doom’, creating a nearly ten minute long passage of Doom that rotates cyclically between atmospheric mid-tempo phrases and fast, grinding Death. ‘Whispering The Incantation Of Eternal Fire’ closes off the remaining original material on “Sepulchral Psalms From The Abyss Of Torment”, combining all the technique laid on the previous songs and burning itself out with a closing solo. The final song on the record is a cover of DARKTHRONE’s ‘Cromlech’, from DARKTHRONE’s 1991 storied debut, “Soulside Journey”, which stays close and tight to the original. The production on “Sepulchral Psalms From The Abyss Of Torment” will push the low and middle ranges of most speaker systems. The deep bass frequencies in line with the manic drumming create a constant thundering surge, while the guitars possess a tone akin to the buzzsaw-style distortion of early Swedish Death Metal. As a whole, a lot of frequencies are left unrestrained, rather than beaten senseless and packed into the corner like most modern-day Death Metal production jobs. KINGDOM have done the Polish Death Metal scene proud with this record. Fans of brutal Death Metal will want to check this out. Godz Ov War Productions is responsible for this release and can be reached at www.godzovwar.com. KINGDOM can be reached at www.facebook.com/kingdomtempleofdeath.