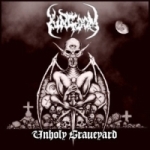 “Unholy Graveyard”, the debut album by Poland’s KINGDOM, is a jewel in the flooded release-mania these days. I think I speak in the name of the whole Voices From The Darkside family that there are far too many releases out there today and the problem is that most of these releases are simply mediocre (at least I totally agree here – Frank). Does it make sense to write a review about those releases? No! The band, if honest to them, recognizes alone that their output isn’t good enough. Well, that’s not the case for “Unholy Graveyard”. It took me a while to get the foot in the door of this release and after a few runs I can say that the ultra brutal blasting yet old school-esque produced massacre kicks ass! The included ‘Into The Storm Of Steel’ from ANGEL CORPSE might give you a small impression what this band is all about, though KINGDOM are more than a band who likes some kind of name-dropping because of a coversong. To me this coversong wouldn’t have been necessary at all as there are many songs on this recording which shows a good dose of Death Metal the way we like it. A recommendable release for Death Metal fans who like it brutal in the vein of ANGEL CORPSE and IMMOLATION. Available at www.time-before-time.com.