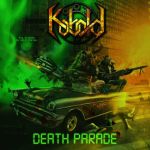 Straight from the Serbian capital Belgrade, we have a relatively new band called KOBOLD. With a name like that, I expected some Black or Death Metal, but I was proven wrong. On their first full album after two EPs, the three piece offers a journey through the varieties of Thrash Metal. And it’s a quite refreshing journey all the way through “Death Parade”. After the opening intro piece ‘Madman’s Overture’, KOBOLD kick down the gear with the title tune, a pretty classic thrasher that meets international standards without any problems. But there are not only classic, mainly American styled thrashers here on “Death Parade”. On ‘Fake’, for example, we already have some more modern tones in the sound, ‘I, Icarus’ is quite catchy and melodic and ‘When The Eyes Turn Inwards’ has some borrowings from Power Metal. Sometimes KOBOLD slow down the speed, not only for a break or two but even for a full song like ‘Soul Funeral’ that comes along quite in a more “alternative” sounding 1990s style, a good reason why this one is not my favourite on the album. But hyperactive thrashers like ‘Ministry Of Propaganda’ or ‘Thrill For Speed’ are a fine compensation for that flaw. And with the final EXCITER cover ‘Stand Up And Fight’, KOBOLD prove a good taste all the way. So they do with the cover artwork that reminds me of the works of Ed Repka, as far as the colours and the style is concerned. So if you’re looking for some fresh Thrash Metal that has no mindcuffs, “Death Parade” is quite a good recommendation. Visit KOBOLD at www.facebook.com/koboldcrew or their label at www.facebook.com/ibdc666