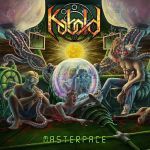 “Masterpace” is the title of the second studio album from the Serbian band KOBOLD, Thrash Metal from the Balkans, published by the Mexican label Iron, Blood And Death Corporation. I am honestly not very aware of the Thrash scene of that country. Initially they were called LETHALIK and later in 2015, they went on to record under the current name KOBOLD. From the original line-up only Elio Rigonat (vocals, guitar) remained; and then an EP, live album and the debut full-length “Death Parade” was released in chronological order. Initially, maybe you’ll tell yourself, well, another Thrash Metal combo? A stagnant style that doesn’t evolve and sigh! Yes, this trio is not a new innovator in the genre or anything, but it is not a retro group either and they try to do things in their own way, because they keep the sound that comes out of their amps, without retouching it in the studio as if from a concert it was. And that works! Also, as a feature, they introduce some extreme influences in their formula, such as riffs, guttural / torn voices and ultra sonic speeds. Their singer is aggressive with touches on hysteria, he reaches quite high notes and his clean voice will reminds you very much of John Connelly of NUCLEAR ASSAULT and Mike Sanders of TOXIK. The guitars are twisted and with technique, maybe with small touches of MEGADETH and the likes here and there (if you are not sure, listen to the song ‘Vertigo’ for example). The bass is dirty, corrosive and not the classic one that keeps a fixed pinion. Altogether, everything on this album is played at breakneck speed; for that “in your face” sound, the riffs are twisted and black enough to appease the crustiest speed freak. That said, I would point out ‘Ad Astra’, which is fast and violent, with an easy to remember and catchy refrain, of those who stay in your head once the album has finished. ‘Thrash Overlords’ starts with a blazing riff and moving forward with excellent changes, but quite fascinatingly keeps a bleak, depressive atmosphere throughout and in ‘Blood Drops’, after charging away with a storm of well-placed dissonance and energy, the song breaks into a very loose and placid acoustic section however the transition is strangely quite natural; both are proof of their fine skills in blending multiple genres. Like its predecessor, this work has been recorded at the Belgrade Sound Production Citadel with Luka Matkovic (THE STONE, JENNER, NADIMAC), who has taken care of mixing and mastering, while the production has been done by the band itself. “Masterpace” by KOBOLD is extreme Metal with a focus on Thrash. So, I would probably encapsulate this quite an original album as I probably wouldn’t succeed, if I was looking for another similar record where variable vocals and genre overlap give the feeling of exceptional listening. Explore more about the band at www.facebook.com/koboldcrew or visit their label page www.facebook.com/ibdc666.