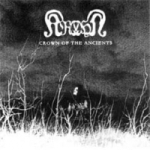 I’ve never heard about this band before and I should admit it has been a great surprise and revelation from the US scene as I find no particular groundbreaking Black Metal act has been unleashed throughout this country. The one man band has been founded in 1995 and aims to capture the most depressive and darkest aspect of the genre. Since the first tunes it can be clearly heard that Numinas avoids the Black Metal’s ultra blast beats cliché to fall down an unfathomable depth… deadly arpeggios or intense tunes are granting this demo a very special tense moment, the guitars being supported by slow-mid purified rhythms. Two bands came to my mind when I listened KROHM’s “Crown Of The Ancient”: the three first MANES’ demos and Forgotten woods, especially for the vocals but don’t get it wrong… here is the purest Black Metal feeling there, an entire and sincere devotion to fall down, not only an imagery, and a music that resembles more or less to Black Metal for a better packaging / selling… it can be clearly felt that this 3-track demo has been made with honesty and resentment so that the music sounds really personal without being totally original. This is how the true flame can be feed to my point… Slow as a corpse decomposition the three titles bring you back to the primitive essence of Black Metal, hatred, misanthropy, darkness and a funeral march to the purest blasphemy. Some keyboards can be found in the background sometimes and are revealing another dimension in KROHM’s music; a special highlight that reminds me a lot of old MANES stuff has to be heard on the 3rd track for the intensive guitar riffing contrasts with the slow rhythm and delivers a higher point of darkness that should definitely make you check this out! Await the first album “A World Through Dead Eyes” for it should be a really worth checking piece to be released.