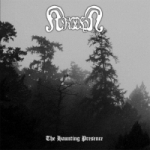 With the recent signing by the French label Debemur Morti, this project of Mr.Numinas, ex-keyboardist of Evoken and Abazagorath, as well as drummer for Drawn And Quartered and ex-drummer of Funebrarum, presents their second full-length after two succesfull works, their mini CD “Crown Of The Ancients” and their first album, “A World Through Dead Eyes”, which had a quite good response (in my case, I take the first one, which is really ghostly). There is no doubt that this guy is an excellent songwriter, and when it comes to slow, ethereal and totally desperated Black Metal, perfect for a foggy and rainny day, he knows what he is doing. In the seven tracks included on “The Haunting Presence”, all with a length superior to seven minutes, we can find really high-pitched guitars forming shades of simple and enveloping melodies (together with the bass), keyboards that increase the depth of the before mentioned and drums which are the most extreme part of the album, not for being especially technical, but they avoid the slowness and give a bit more of groove to the rest (although I still have the doubt that they are drum computers for the precission of the double bass on the fast parts); finally, a shrieking and raw voice, really ghostly too. On their previous works where we could see clear influences from Burzum, the very first Katatonia or Forgotten Tomb and even Xasthur on their less minimalistic moments (‘Lifeless Serenade’ is a good example), but I think that, still maintaining them, especially the Burzum ones (and remembering “Filosofem”, although on a less raw and more melodic, even more theatrical and creepy way), with those melodies of dissonant notes, Numinas has found how to evolve within the genre and finds a bit more his path, without forgetting that the songs are better worked out than on their previous ones, as well as the ones of the mentioned influences. I don’t forget the fact that two tracks are sung in Italian, and I think it would be a good point to think about in the future, as they sound especially good, a bit rawer than in English, especially ‘I Respiri Delle Ombre’, which is my favourite track of the album, with those misanthropic and desperate lyrics you can understand perfeclty (in the case you speak Spanish as me). I will only add that on the production side he achieved a raw and minimalistic sound without appealing to low-fi and low means, which in the end make the music less understandable. www.debemur-morti.com