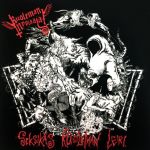 Grind gods GENERAL SURGERY / SAYYADINA’s Andreas Eriksson has secret extra doses of lethal Metal to sell. Disgust merchants KUOLEMAN NYPLÄÄJÄT’s only work, "Seksikäs Kuoleman Leiri" (which should roughly stand for something like "Sexy Death Camp", just to give you a glimpse of the record’s mood) is a straight-ahead war horse flying at bullet speed towards the target. This collection of demented tunes was first released on cassette tape by Backwoods Butcher Records in 2015 and subsequently engraved on CD in 2017 by Colombian label Trauma Records, though the musical content was originally recorded no less than 9 years ago. This is one of those records whose cover art speaks as eloquently as the songs themselves: some satanized hog sodomizing a mutant nun while being surrounded by barbed wires, a battered penis, one hooded guy and a number of rotating deformities. The band’s sound reminds me of a Death Metal version of IMPALED NAZARENE but, truth be told, the entire record is more on the raw black side, with pretty brutal and intestinal growls to mix up the recipe. Paha Erektio’s unstoppable ride cymbal work feels like a flooding river, carrying the right amount of sludge for the rest of the band to dwell in. An easy, enjoyable demo with a nice tongue-in-cheek attitude for all Deathbangers out there who like their MASSACRE cover versions raw. Get in touch with the guys through the label’s address: traumarkhan@hotmail.com.