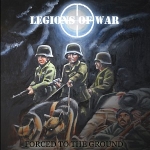 LEGIONS OF WAR
Forced To The Ground
(Infernö Records)
41:00min

I still remember the times in the late 90s and during the first many years of the 00s, where I was more than fed up with melodic Swedish Death Metal, one couldn’t look left or right without getting some of that rehashed awful cashcowing excuse for extreme Metal thrown in the face. When the genre emerged the bands and music had their place and a reason to maneuver, though as it often happens when something gets a tad popular, a whole lot of mediocrity jumps the wagon and the tea becomes quite thin, and that was exactly what happened to melodic Swedish Death Metal, whether it was made in Sweden, Germany, Holland or in the USA, and that quite killed the excitement for me, even though a few of the old bands have withstand the test of time. All that rambling for what? You think, unless you’re one of the clever ones who already has figured out, that LEGIONS OF WAR has their base in melodic Swedish Death Metal, for one thing, for another they are a Swedish band. A Swedish band doing one of their national Death Metal genres quite good. "Forced To The Ground" is their second album, and I can’t remember having been across their debut "Towards Death". Which really doesn’t matter right now, as this, their sophomore effort has grown on me, the more listens it has received. I was left quite so so, when the first spin stopped, though as time went and the amount of spins became more, I started to get into the universe of the band. At first it sounds like a run of the mill standard attack of melodic Death Metal, though when it gets time, a lot of layers open up, and that together with the very catchy songwriting makes this album quite headbangable. There are a lot of good and hooking melodies, brutality, epic sing a long moments, which reminds me a lot of the first AMON AMARTH EP and GOD DETHRONED in their heights, especially due to the vocals most of the time, and the epic slasher ‘Grandiose Visions’ which really makes my day, and reminds me of ANCIENT RITES when best. We are getting tons of great guitar moments, driving and catchy rhythms, and the songwriting is really well done and catching, it is quite tough not to stomp and sing along after three spins of the record. It is not quite original what LEGIONS OF WAR is doing, but it is damn well executed and working, catchy and hooking. I am also quite impressed by the vocals which varies decently and is one that sticks, and the pronunciation of the vocals in ‘Grandiose Visions’ is mere brilliant. If you miss the good parts of the melodic Swedish Death Scene with a good dose of brutality and epicness, this is the release you have been waiting for, this band or at least "Forced To The Ground" deserves some thunder as it boils up all the good parts into one hellish furnace of catchy yet aggressive and a tad brutal and epic Death Metal tale of war. Take a view of the ages: www.legionsofwar.se, www.facebook.com/pages/legions-of-war/127679583992635, www.inferno-records.net