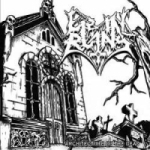 LIE IN RUINS
Architecture Of The Dead
(Temple Of Darkness Records)
25:38min

Scheduled to be released in September 2008, Finnish LIE IN RUINS come up with their first regular MCD on Spanish Temple Of Darkness Records, known for unleashing gems from the past like ETERNAL DARKNESS or MOONDARK. "Architecture Of The Dead" basically compiles all tracks from the "… Statues" demo minus the intro and outro plus two tracks from their debut demo, ‘Chambers Of Hatred’ and ‘Monument Of Revenge’ to be exact. Definitely a good move to make the material available as a proper release as both demo CDRs are sold out which is no wonder given both the limitations (300, respectively 150 copies each) and the quality of the material. It is hard to judge whether the tracks have been re-recorded or just remastered – that question will most probably answered in my long overdue interview. At least the cymbals seem to be more present in the mix this time and some little intros and effects have been added. Anyway, "Architecture Of The Dead" comes across as a coherent offering and not a mere collection with audible differences in terms of production or songwriting between the tracks. For stylistical references check the reviews above. As most of the accoustic bits that carried a certain AUTOPSY – flair have been omitted the general impression leans slightly more on the classic Swedish side of Death Metal things, though. The cover is graced by a slightly crude drawing of a satanic chapel with adjacent tombs and a twisted tree, so the packaging follows the direction established with the "… Statues" demo. In a way the design is somewhat reminiscent of the tape cover of DEMIGOD’s "Unholy Domain", whereas the music, as stated earlier, sounds much more Swedish. This should appeal to everybody into classic morbid Death Metal with good songwriting and a cool underground production, enough said. http://lieinruins.deathmetal.fi