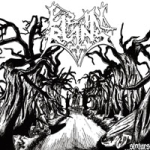 After the magnificient “… Monuments” demo LIE IN RUINS (now a three-piece) return with another slab of Death Metal entitled “… Statues”. Not much has changed compared to the predecessor, nevertheless some little details are different. Whereas the previous effort was heavily influenced by AUTOPSY the early Swedish influences (like GRAVE) seem to have taken a slightly more dominating role here considering the riffing. Fortunately, the doomridden passages that are accompanied by accoustic picking are still present as for example in the second track ‘Autopsychopath’. Well, ENTOMBED and DISMEMBER used to be influenced by the sickos around Mr. Reifert anyway, so… “… Statues” is similarly packed with great classic arrangements, pure morbid riffs, screaming leads and heaviness so anybody who liked “… Monuments” will also dig this one. The overall production is again rather raw and maybe a little bit more crunchy – not quite Sunlight Studio but pleasantly dirty yet powerful. Another little difference are Ronis vocals which are more on the deeper end here. I think the inclusion of BOLT THROWER’s “eternal” riff from ‘World Eater’ and ‘Cenotaph’ is an homage to their influences. Even though it has been competently embedded into the song and gets soon overwhelemed by an AUTOPSY-styled solo, I am not too fond of obvious quotations like this as I think that LIE IN RUINS have enough potential to deliver their own ideas. It might sound contradictory to some but even when a band is not overly original it stil can be individual. Apart from this little bit of criticism LIE IN RUINS have again come up with a great piece of Death Metal which should appeal to all maniacs who dig old Scandinavian Death Metal done with class. By the time you read this, this demo CD-R is also sold out but in the meantime the band has been signed by Temple Of Darkness Records and a MCD compiling songs from the two demos is in the pipeline. Keep your dead eyes open for the upcoming interview here! www.myspace.com/totaldeathattack