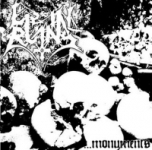 Another rough gem from beyond the grave is what we have here. Hailing from Finland, LIE IN RUINS (consisting of only two members on this recording) convincingly deliver dark and morbid Scandinavian Death Metal like the mid-nineties never happened – a good thing in my book! It is surprising how much “… Monuments” is in tone both visually and accoustically with the spirit that was present in so many acts back then. The simple but effective cover sporting a pile of skulls adorned with the cool bandlogo (the monicker itself is great, too!) already sets the atmosphere. After a short intro the listener gets blasted with ‘Skinstripper’ an unrelenting raw and pure piece of Death Metal that immediately conjures up images of early AUTOPSY, somewhere between “Severed Survival” and “Mental Funeral”, and early ENTOMBED during their demo days – hell, the leads could have been written by Cutler / Corralles and Cederlund / Hellid respectively! Also a slight ABHORRENCE / early AMORPHIS – vibe is present, especially in “Monuments Of Revenge’, the last song before the outro – which itself is a dark accoustic picking with twisted screams on top – total AUTOPSY worship! Add a dash of BOLT THROWER and maybe early GRAVE for the overall heaviness and there you are. The vocals of Roni S. also come across as a mixture of a young L.G. Petrov and Chris Reifert, maybe a bit less putrid and disgusting but equally possessed and struggling. Even the gritty and raw production (endowed with enough delay on the leads) fits… What must be stressed is the fact that LIE IN RUINS have obviously put quite a bit of work into the songwriting as all the four songs on “… Monuments” have their own traits, develop and culminate very convincingly. LIE IN RUINS do not plow senselessly through the songs but really deliver morbid dark Death Metal with some doomy vibes, cool leads and great soloing that actually adds depth to the songs. One might criticize that LIE IN RUINS are absolutely unoriginal but considering the fact that this a) their first demo and b) an absolutely great and crushing one I couldn’t care less. To be honest, I find “… Monuments” much more convincing than several other recent attempts of other bands to capture the feeling of dark Death Metal. This CD-R is already sold-out as it was limited to 100 copies but the band made the whole affair available as a download, also including the cover. Cool move! Go to lieinruins.deathmetal.fi/en/news/ and check the releases section.