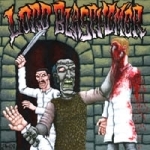 Even though the release of LORD BLASPHEMER’s self titled debut demo already dates back to 1989, I seriously doubt that many of you will still remember this Chicago bunch (me included)… Let’s face it, their existence was simply too short lived to gain big international attention due to the fact that the band already fell apart again after the release of their second demo “We Love To Kill” in 1991. Bad timing, cause according to the info sheet that I received, even UK’s Peaceville Records already showed interest in them back then… But anyway, in 1997 bassplayer / vocalist Erik Pertl put together a new incarnation of LORD BLASPHEMER and released a new demo in 1998, followed by a demo CD about a year later. They played several live shows, even supporting lots of wellknown acts until new line-up problems almost ended their career for the second time. But luckily that didn’t happen and the guys went on to record their first album “Tales Of Misanthropy, Bloodlust And Mass Homicide” with session drummer Jim Kerley (who already used to be part of the band at an earlier time in their career). The result impressed the guys at Metal War Productions so much that they went on and released it. Good decision, cause the material on offer here is relentless, ugly, raw, uncompromising and extremely hard hitting Thrash Metal, with lots of reverb on the roughly performed vocals, a distorted, upfront (yet extremely skilled performed) bass guitar and simple (yet very effective) cutting lead guitar work. Musically the band obviously pays tribute to early SODOM, AT WAR, MASTER, AUTOPSY, VENOM and the likes, but their own performance is a lot more intense and aggressive than anything what the aforementioned acts ever released. So, don’t let yourselves fool by the rather Black Metal-ish band name and the gory (and quite silly) coverart. Musically this is killer stuff! Can’t wait to hear more of them. Label contact: Metal War Productions, P.O. Box 5996, Philadelphia, PA 19137, USA, metalwar@metalwarprod.com, www.metalwarprod.com