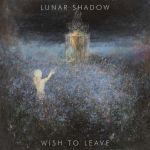 The German LUNAR SHADOW are an already quite established band by now, as “Wish To Leave” is their third full length album within four years. Yet the five-piece was unknown to me until I got to hear the songs from “Wish To Leave”. Maybe this was due to the fact that their style of music is not the one I preferred in the last years. And I’m not sure if this will change with this album. The sound of LUNAR SHADOW is not typical for Metal, I’m even not sure if Metal is the right word to describe the sound of this album. If you are into heavy guitars, crunching riffs and a wall of sound, LUNAR SHADOW might not appeal to you. Instead, we have guitars that are taken back and somehow remind me of early 1980s Prog Rock or even guitar based New Wave bands of that era. Thus it is no wonder that the songs presented on this album mainly are reminiscent of bands like WARLORD, who always were a very special band in the 1980s Metal scene, their follow-up project LORDIAN GUARD or sometimes even SAVIOUR MACHINE. In other words: LUNAR SHADOW are far away from being Heavy Metal on “Wish To Leave”. But they are also far from being completely negligible, as they are really able to create melancholic and sad moods with their songs. Especially ‘I Will Lose You’ and ‘To Dusk And I Love You’ are worth mentioning here. It is not until the final ‘The Darkness Between The Stars’ that in some parts the guitars are firing up a little bit, the drums are picking up a little speed and the melodic voice turns more harsh. But that might not be enough to fulfil the desires of a headbanger. In case you feel addressed please visit www.facebook.com/lunarshadowband or www.facebook.com/cruzdelsurmusic