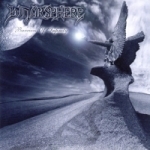 Lunarsphere is a really new band, founded in 2004, presenting their full length debut demo CD now. It includes (after a totally unnecessary intro) 9 tracks of melodic Death Metal. And I have to be honest, I have some problems with the record. The first what I recognized is the production. It lacks in power. The whole record sounds dumb and not well balanced and clear. But to the music. The songs are not bad. You get nice speed parts interrupted by melodic parts, some technical breaks and mostly nice guitar solos. The track ‘Inside A Spider’s Web’ shows this combination best on the record and it is the best song by far. The other material varies between shallow and not bad. Sometimes the solos are little bit too much jingling. But the biggest problem (and I’m sorry) are the vocals. They are too one-dimensional and sometimes not more than a cawing. So for a debut CD the material is ok and if the band writes more songs like ‘Inside A Spider’s Web’ with a better production, they can make their way. Contact: www.lunarsphere.com