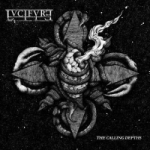 This debut album from England’s LVCIFYRE takes a minute (or two) to warm up. The opening track (typically among the strongest songs on an album) underwhelms with dry drums and overall uninteresting riffs. Things pick up on the second song, ‘Succubi’: "Failures For Gods" era IMMOLATION riffs, and interesting effects. ‘The Faceless One’ storms like a VADER song, powerful and layered with riffs that are more intricate than meets the eye. This will surely be a fan-favorite in the live setting. Another boring song then ‘Holy Chaos’, a KRISIUN-inspired blaster that may also prove a fan favorite. I’m a big fan of the guitar effects employed on this one; reminiscent of Erik Rutan’s soloing. The greatest example of good soloing on this album is in ‘Death’s Magnetic Call’. Perhaps somewhat of an unfortunate title in light of METALLICA’s idiot decision to release another crap album – but fine, the song is certainly free of any jock rock taint. And the solo in question sounds, at first, like a high-pitched human scream from a forgotten MACABRE album. The effect is somewhat disturbing, but then again that was probably the point: if it sounds sick, go with it. And this does sound sick. So while not every song will amaze, not every song sucks, either. This is good stuff and well worth checking out. Support! www.facebook.com/lvcifyre, www.pulverised.net