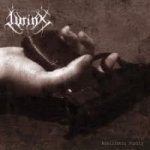 Sometimes it’s only one song which makes the difference. Think this old rule is more than applicable to this release from the British band LYRINX. The band is playing raw misanthropic Black Metal and this album had been released by Insidious Poisoning in early 2008. The playing time is less than 30 minutes because we are only talking about a handful of songs in total plus one bonus track for the vinyl release (a rawer rehearsal version of one of the EP tracks). But keeping GORGOROTH’s twenty-five minutes manifest "Antichrist" in mind, ‘Nihilistic Purity" is nevertheless a great EP. LYRINX are following the traditional nordic Black Metal way (no keys, no female vocals) but supported by a good sound they can offer with ‘Deconstruction Of The Will To Live’ a song which is channeling all their power, hate and emotions. I can’t listen to the release without pressing the repeat button; believe me this song with its dark atmosphere and the increasing pressure at the end of the 11 minutes is maybe not the only reason but the best reason to support the band from the British empire. Really looking forward to the planed split releases with bands like ELYSIAN BLAZE which will show further musical sides of the LYRINX universe and what we can expect from this band in the near future. www.insidious-poisoning.com