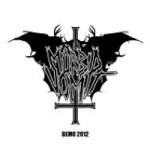 Seems like Finland is becoming a promising land for some quality Death Metal again, after almost 20 years – or perhaps it has become that already. These gruesome looking, blood-covered deatheads in MÖRBID VOMIT, hail from the ‘Chicago of Finland’ (as it’s been told), a small city called Lahti – and all the 4 guys have also got pretty much past experience behind them already by playing in some other bands as well (this list consists of such names as THE FINAL HARVEST, DAMNGOD, DEVILHORN, THE ZOMBI and so on). All this musical experience that they already have there in MÖRBID VOMIT, shines beautifully through all of their 4 songs as well, when the band went in the studio to record them within just 3 days in this June. As for the songs, one particularly familiar name that seems to pop out from this demo all the time, is Sweden’s own butchery company, BLOODBATH – added with some Finnish Death Metal flavors for good measure. The songs have got an overall instant kill value squeezed into each of them. As exaggerating as it may sound to some of your ears / eyes, but each of these 4 songs featured for this first (promotional-) demo of theirs, has got more than just a bloody fistful of those vital yet sinfully catchy ingredients sucked in, to make MÖRBID VOMIT one of those bands that do impress the masses right from the very start. These Finns do rip, tear, twist, punish and simply murder by the 4 infamously brutal and heavy – oldschool Death Metal tunes that their debut demo is blessed with. Even the production is darn top-notch, supporting MÖRBID VOMIT’s aural Death Metal holocaust perfectly, not even leaving any space for minor complaints. An extra mark of the devil for an oldschool-ish band name. Sounds great to my unyielding ears – and the band logo looks just tasty. Oh, and my fair guess is that by the end of the year, some label has already snapped MÖRBID VOMIT under their heavy, darkened wings. Feel free to make a bet with me for this – the cards have been laid down on the table and I’m ready. More information about these vomiting morbid minds can be traced down at the following url-address: www.morbidvomit.com