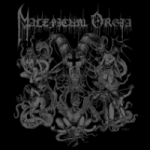 An album with 66 songs and a playing time of 66:06 minutes could be easily connected with the devil? For sure because MALEFICUM ORGIA are part of the French Black Metal scene since 1991 and their self titled debut after 16 years of existence is paying tribute to the old gods BLASPHEMY and DARKTHRONE. With this few words it’s quite obvious that the price for musical innovation will not go to France this month because the rules are quite clear. Three hungry guys (bass, guitar, drums) plus some nice moaning women and we are ready for the final battle. I’m not really a big fan of the true way of Black Metal these days because the current releases are more copy kill than everything else but MALEFICUM ORGIA know their business and they avoid this ‘heard 1000 times’ feeling. Think if the album had been released maybe 10 years ago my enthusiasm would be a lot higher but these days it’s nothing more than a solid debut with some real good songs due to the fact that in the end it can’t offer something really unique. But if I would have the choice I would prefer this release instead of buying the latest albums of some of these old idols (especially our dear friends of ‘Canadian Metal’). www.insidious-poisoning.com