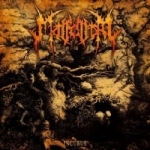 I still remember the times when a new mail order catalogue arrived and you entered another realm to see which of your favorite bands surprisingly released a new album or which obscure newcomer entered the arena. These times are long gone and the overwhelming amount of releases every week makes it very difficult to distinguish between shit and Black Metal (because both are in some way dark matter!). The MALFEITOR debut “Unio Mystica Maxima” released in 2007 via Scarlet was a more than positive surprise and their new album “Incubus” won’t disappoint any fan of this established band from Italy. The band members – which should not be completely unknown due to their involvement in Italy’s post modern Black Metal crew ABORYM – are sworn supporter of the true dark Black Metal cult which shaped a whole movement nearly 20 years ago. And in these days the maxim was next to “Pure Holocaust” a majestic and evil atmosphere. MALFEITOR are for sure not a new / next EMPEROR but songs like ‘Mysterious, Mystical, Majestic’ or the killer track ‘Void Of Voids’ are a proof that not the last hope has burned down to dusk if it comes to the roots of this music. These tracks are not keyboard drowned but aggressive Black Metal with some slightly atmospheric parts, paying tribute to the Norwegian Metal gods. I’ve expected this fantastic release and MALFEITOR are in some way a dose of fresh blood against the omnipresent decay. www.agoniarecords.com, www.malfeitor.net