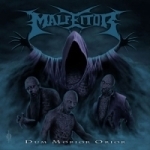 First off, it could be said that the Swedish Death mongers MALFEITOR are again one of those prime examples how the Swedish old school Death Metal actually should sound like; MALFEITOR do sound so Swedish old school Death Metal as it can just be possible on their debut album "Dum Morior Orior" in the first place. Heavy, immensely crushing, brutal, down tuned and just vicious old school Death Metal that truly throws its listener back in time when bands like NIHILIST / ENTOMBED, CARNAGE, DISMEMBER, GRAVE and the likes, were pioneering a sound that later became a huge trademark in the markets of heavier side of music. That’s exactly what MALFEITOR’s stuff is also so much all about. The Swedish old school Death Metal phenomenon has effectively been taken in use within this 11-track opus – and now when all the necessary is kind of nailed down already in these first 3 aforementioned lines or so, I guess we could always leave the facts straight down to those lines only. But seriously – c’mon, there’s really nothing new in MALFEITOR’s zombie costums that they could bring out for this already vast table of Swedish Death Metal but on the hand, when things are done well and somewhat convincingly enough – and in a certain fashion even, there’s always a door open for one to return back, whenever having this specific feeling to get ass-kicked by some old-fashioned dose of Swedish Death Metal. "Dum Morior Orior" does just that – and MALFEITOR’s death and zombies-reeking Death Metal obviously appeals to many of us to a certain extent, no doubts. However, as there’s tons of similar stuff on offer these days, I am not that sure whether this is the kind of record that I will remember after some years have passed by. I will always remember such iconic Swedish Death Metal releases as "Left Hand Path", "Into The Grave", "Like An Ever Flowing Stream", "Dark Recollections" and such – and make even occasional returns back to those records, but with "Dum Morior Orior" it will most probably be a bit different case there. It’s no denying that as cool and well crafted record as "Dum Morior Orior" undoubtedly is after all, it will never have a true, optimal potentiality to break skulls the same way as some other Swedish Death Metal releases did back in the day. Almost feel sorry for the guys of MALFEITOR because of this. More at: www.myspace.com/malfeitorswe, www.hellthrasher.com