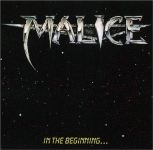 A journey back in time… I was a 15-year-old kid, a little rebellious and always willing to find new Metal bands. Time was spent listening to any heavy band I could get hold of, be it the classic big names like IRON MAIDEN or JUDAS PRIEST, be it new acts like METALLICA or SLAYER. Two or three times a month, I took the train to Bremen to go shopping for new records. There were quite a few nice shops there back in the days, most of them offered the opportunity to listen to the records you were interested in. I remember a day in September 1985 when I was at one of these shops (Barlage, Frank will surely remember…). Today I’m not that sure why I grabbed the recently released album of a really new band from the US called MALICE. Was it a promising review in a great Metal magazine? Was it a well placed ad from the major label? Or was it the radio’s fault? Anyway, I chose this album, called “In The Beginning…”, listened to it and decided to take it home with me. MALICE were on the edge of a British inspired style of Heavy Metal and a pretty distinct American sound, they had good songs and good vocals, so I listened to it quite often. Yet my interest in the album was soon swept away by the more and more exploding Thrash Metal wave that took me by force. Now let’s return to present times… Meanwhile a little more than 30 years have passed since then, classic Metal had its great comeback at the end of the last millennium, tons of albums got re-released, so now it is time for a proper re-release of the old MALICE stuff either. Rock Candy Records are in charge, so we can be sure that this task is done with love and care. In the three decades past, “In The Beginning…” earned the reputation to be the best JUDAS PRIEST album that PRIEST themselves never recorded. Listening to “In The Beginning…” again, this reputation clearly doesn’t come out of the blue. The vocal delivery of James Neal is very similar to Rob Halford in his best days, and the songs are pretty much PRIEST inspired as well. Just listen to songs like ‘Stellar Masters’, ‘Into The Ground’, ‘Air Attack’ or especially ‘Hellrider’, which breathes the air of ‘Hellbent For Leather’. But it’s not only pure and damn good PRIEST worshipping here, since MALICE never denied that they were from the US. Songs like the stomping opener ‘Rockin’ With You’ or the catchy ‘Squeeze It Dry’ appear to be a little more 1980s radio friendly, and ‘Tarot Dealer’ even had a nice and sleazy KISS vibe in the intro part. The great ballad ‘No Haven For The Raven’ had the potential to be a real #1 hit. To round off the album, the last two songs turn out to be the real highlights on “In The Beginning…”. First it’s the fantastic and pretty dark ‘The Unwanted’ with its end time lyrics and in the end we have the epic ‘Godz Of Thunder’. These two songs alone are the best justification to make “In The Beginning…” available again. In order not destroy the album in its whole by adding some not fitting and maybe poorly produced songs, Rock Candy refrained from bonus material. In my opinion, this is a wise decision! To continue the story of MALICE here quickly, I need to tell that MALICE released another album called “License To Kill”, which wasn’t as good and powerful as “In The Beginning…”. The fact the sales of the two albums weren’t as expected led to MALICE being dropped by their label Atlantic. Thus the end of the band came not that much later in 1989. In 2006, guitar duo Jay Reynolds and Mick Zane returned with a remoulded MALICE line-up and released a new and not that convincing album with singer James Rivera, the jack of all trades in US Metal. But that’s a different story that doesn’t affect the high quality of this re-release. Check the band: www.facebook.com/maliceamericanmetal, or the label: www.rockcandyrecords.com