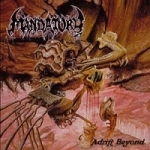 I was eagerly awaiting MANDATORY’s debut full length “Adrift Beyond” for quite a while already as I heavily enjoyed all of the band’s previous releases and the fantastic cover artwork by SV Bell in combination with the great MANDATORY band logo looked very promising already. But all in all my expectations were obviously a little bit too high as the album unfortunately didn’t really turn out as crushing as I hoped it would. Somehow it seems that the band changed their songwriting over the last couple of years quite a bit – from the very brutal, straight into your face old school Death Metal, towards a little more sophisticated direction, with some melodic overtones here and there. But by this I certainly don’t mean that they have wimped out or something… just listen to the amazing vocals of drummer Stinne, who still can easily compete with Marc Grewe (MORGOTH / INSIDIOUS DISEASE) or Martin van Drunen (in his PESTILENCE “Consuming Impulse” period). This is nothing but pure fuckin’ Death Metal at its best! So, when it comes to the aforementioned melodies, I would prefer to name DISMEMBER’s later releases as a reference here, as they also started to spice up their raw material with some melodic guitar leads. But MANDATORY probably went a little bit too far by also adding some keyboards to certain parts of the songs… I could easily have lived without that, especially since those keyboard parts sound pretty cheap and not really convincing at all. On the whole album the brutality of their older songs unfortunately doesn’t shine through that often anymore as the songwriting got changed towards a little more complex direction (probably in order to make the songs sound more interesting), but it doesn’t really work well for them… And the mix that Tomas Skogsberg was hired for, is nothing but disappointing! It’s a very strange sound that lacks depth and real heaviness and by no means lives up to MANDATORY’s powerfully produced previous releases. Best reflected in the re-recording of ‘Crypta Crawler’ (originally on their “Where They Bleed” MCD)… Even though that song is still one of the highlights on “Adrift Beyond”, the sound is so much worse than on the original recording, that it’s a pity. So, what we have here is an album, with a production that definitely leaves a lot to be desired and songs that are a bit too much written from a musician’s point of view. I hope that their next album will be a step back again… and that is meant in a positive way of course! Until then make sure to check out MANDATORY’s extremely cool “Exiled In Pain” compilation CD as it not only features all of their demos and EPs, it also showcases the band in a way better shape! More info: www.mandatory-death.de, www.myspace.com/mandatory1989, www.xtreemmusic.com