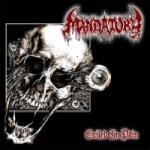 I always wondered why the German Death Metal scene over the years wasn’t that strong compared to the Death Metal scenes from other countries, but it’s a matter of fact that Germany doesn’t have the quantity of great Death Metal bands, still some German bands offer great quality. MANDATORY is one of those which blew me away with their last release “While They Bleed”. This new release “Exiled In Pain” from these German hopefuls is not a new recording but offers all their previous releases (including the above mentioned “While They Bleed” MCD) on one CD plus 2 new songs and 2 covers. The CD starts with the 4 killertunes from their “While They Bleed” MCD and to let you know what I think about these songs I can refer to my review for this MCD to read above. Next are the 4 songs from their “Curse Of The Undead” demo 2005, the 6 songs from their “Divine Destruction” demo 2002 and the 3 songs from their “Beyond The Veil” demo 2003 which are musically the same direction, Death Metal in the vein of AUTOPSY, ASPHYX and GRAVE unfortunately with a sound not as good as their latest effort. The songs, on the other hand, already offered great ideas and a huge potential. After that you get 2 unreleased songs which turn out pretty good and raw, though I have to admit that I rather feel that the sound is kinda poor. Last 2 songs are 2 coversions of REPULSION’s ‘Slaughter Of The Innocent’ and RAZOR’s ‘Cross Me Fool’. Good, but not essential if you ask me. As I don’t have the booklet I can’t write something about it, but I hope there are some retrospective words about the history of this band mentioned (yes there are, plus a couple of pics as well as covers and detailed info on each of the featured releases – Frank). To summarize it, “Exiled In Pain” is a cool release for those who are looking for great Death Metal in the vein of the above mentioned bands and especially for those who don’t know MANDATORY’s last MCD. Those who already own this MCD should decide for their themselves if it is necessary to buy this CD or if they better save their money to spend it on the hopefully soon to be released debut CD “Adrift Beyond” on which I have huge expectations. Hopefully they won’t let us wait too long… “Exiled In Pain” sells for 8 € + postage. Take a look at www.myspace.com/mandatory1989