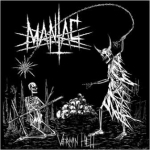 The glorious Metal archives site lists no less than ten bands named MANIAC. Two of them gained a little more attention, one from Austria and a Death Metal outfit from France. Now these MANIAC are from the Spanish capital Madrid, active since 2011, and they should not be confused with another Spanish formation who released three demo tapes in the late 1980s. In analogy to the pretty common choice of their moniker, MANIAC have nothing spectacular to offer. Their first album “Vermin Hell” brings us a well known bastard of Thrash and Black Metal, maybe more on the Speed Metal side than most of the bands who chose that direction. The pretty raw and unpolished sound is nothing extraordinary either. So, why pick up “Vermin Hell”? Well, the ten mainly rather short attacks here are as good as the stuff most comparable acts have to offer. MANIAC sound best when they add some Speed Metallic guitar solos, like in ‘Rising Hell’ or ‘Sordid Deceiver’. If you still think this ain’t too spectacular, you’re right. But on the other hand, songs like ‘Maniac’ or ‘Hellhound’ aren’t the worst choice if you dig some good old fashioned and especially straight stuff with no frills. So you might check out http://maniacband.bandcamp.com, www.facebook.com/pages/maniac/276701185762592 or www.blackseedprod.com