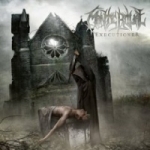 I think most of you know MANTIC RITUAL and their debut album “Executioner” which was released in February this year by Nuclear Blast Records. So this is the LP version which was released by High Roller Records in May. For those who don’t know the band, yet, MANTIC RITUAL are nowadays three guys from Pennsylvania, after their guitarist and vocalist Dan Wetmore quit the band some weeks ago. The new vocalist / guitarist Dave Watson is announced as temporary at the moment. So we will see what happens to this band in the future. Hopefully they make their way because they have a lot of potential and are one of the bright spots of all the 80s Thrash revival bands which are crawling out of every corner at the moment. Yes it is correct. MANTIC RITUAL serves traditional, old school 80s Thrash Metal. They suck in the entire big 80s band, like EXODUS, TESTAMENT and of course a lot of METALLICA. Also the voice of ex-singer Dan reminds me of the young James Hetfield. But the guys know how to write intoxication riffs and the guitarists garnish them with their solos. Producer Andy Classen disclaimed of an 80s revival sound but put the music into a modern sound robe. So listening to the songs makes you remember of the old days in every note and therefore vinyl is the right thing. And what an appearance. The lyrics are printed inside the gatefold cover and again high quality vinyl. So if you like Thrash Metal give this one a try. www.myspace.com/manticritual